I did not know what to expect when walking into a museum that focused on toy marbles. It never really struck me as a crucial piece of history that one city could find important. I was wrong; it is a big piece to a much larger, captivating puzzle that is Akron’s history.
The museum has so much more than marbles in glass cases. It is a gleaming reminder of the history of Akron that anyone who lives in Akron must attend. I am from Cincinnati, and I had never expected so much affluent and pivotal history to engross Akron. No wonder LeBron wanted to come back. Akron has history and who wouldn’t want to be a part of it?

When you enter the exhibit, everything you see is engulfed in fascinating history. The first thing that greets you when you walk in is a staunch, tall gate, which was actually the original gate in the Summit County Court House. There is also a display that shows you Akron in its earliest days as a simple village with the canals running through it. It is an interesting piece as it washes away the concrete buildings you see today and takes you back nearly a century and a half. The display was also built by students of the University of Akron.

I found the most interesting history surrounding the marbles to be that they signified the birth of mass production of toys. Due to mass production becoming prominent, toy prices dropped and more than 250 manufacturers sprouted up during that time, making Akron a beacon of toy manufacturing, bringing joy to children throughout the nation. It did not stop there when it came to toys. Akron was producing so much rubber at the time; they began wondering what to do with all of the excess rubber. This created a new market for rubber toys, such as the Rubber Duck, which became a staple of children’s lives. Akron in many ways was a huge part of creating a memorable childhood for children across the country.

The manager, Michael C. Cohill, is absolutely phenomenal in explaining all of the displays and history that is housed in the museum. Writing it all down in this blog would be an extreme disservice to Mr. Cohill, as the sheer passion he exudes during his explanations of the displays is simply enchanting. You can see he cares thoroughly about the city of Akron, and is ecstatic to shed light on its history of Akron with anyone. Mr. Cohill knows what Akron has been, what it is, and has visions of what Akron could do in the future.

There is so much more housed in this museum that will absolutely stun the Akron community and visitors. It would be a travesty to pass up. It is extremely family focused and the people who work there absolutely love families of all ages and sizes to see all that it has to offer. “We love the holidays,” said Michael C. Cohill, “The busiest times of the year are October through December.” They love to decorate for the holidays and enjoy getting Akron involved with activities to decorate their area in Lock 3.

I could gush for hours about all that I had learned in my short visit to the museum but I would rather leave it up to you to go check it out and piece the puzzle together yourself. A piece of Akron you might not know anything about will captivate you as Akron was a pioneer of many things that you’ve come to know today.

Founded by the City of Akron, the Akron History Exhibit is a project of The Summit County Historical Society of Akron in partnership with the Akron-Summit County Public Library. 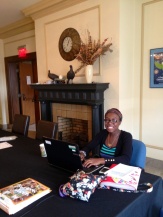 Hillary working on her final blog for DAP

The summer is finally coming to a close and so is my internship at Downtown Akron Partnership. To be honest, I am quite sad that I’m leaving such an excellent non-profit organization. As a small town girl from New Philadelphia, Ohio and a KSU student, I never knew or heard of DAP until my advisor informed me of the opening. As soon as I heard it was a non-profit, I applied immediately mainly because I’ve always wanted to work for a non-profit organization to help out the community.

My words to express the atmosphere of Downtown Akron Partnership is endless, I’ve had loads of fun during my summer doing several different tasks, like promoting new businesses, working the Market at Lock 3, helping out with the Akron Art Prize, and writing blogs. I would have to say, working the Market at Lock 3 with Tony Long (Assistant Operations) was the most fun because I was out of the office, interacting with the community advising them to be healthy. As a health freak myself, I really enjoyed giving some healthy tips to Market-lovers and telling them different ways to live a healthy life.

I also did a lot of writing for DAP, one of my biggest projects of the summer was writing a press release about all the new businesses in Downtown Akron, that was also a lot of fun. I got to go around downtown and interview business owners and CEO’s of new companies and write about what they do, what they offer, and how they benefit Downtown Akron. 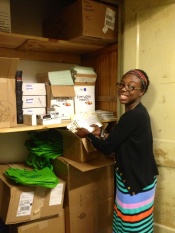 Getting recipe cards for the Market at Lock 3

I wrote a blog about The Coffee Pot that’s located in the Akron-Summit County Public Library. I went down on a Friday morning and met with the owner, Scott Malensek. We sat, drank coffee, and talked for about an hour about his two businesses. This was by far the best interview I have experienced. He was so excited and so enthusiastic about his business, it made me excited for him. He even let me try out some of his new menu items and talked me into going to his other business, The Stew Pot Kitchen. I tried some of his famous Tomato Basil Soup, and let me tell you, BEST SOUP EVER!

There are so many restaurants and activities to do in Downtown Akron, it’s quite overwhelming! But it also makes me want to move here because it’s such a great community with something always going on. Downtown Akron provides a great community for locals and that’s what I love the most about DAP. They really care about providing a fun, safe, and clean place for people to live and have fun. 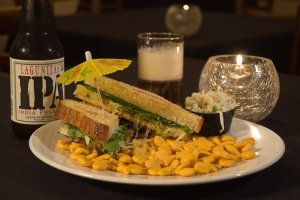 This town’s favorite hangout for grilled cheese sandwiches and microbrews is turning up the class and music this weekend in celebration of its fourth year in business.

Everyone is welcome at The Lockview’s annual fall formal, Saturday, Nov. 19, as long as they’re dressed in their evening best. The event begins at 4 p.m., when doors open for dinner.

To mark the occasion, The Lockview will tap a Founders Brewing Co. specialty keg – the 10.2 ABV “Backwoods Bastard,” a bourbon barrel aged ale – likely the only keg of its kind in town. Also, a photographer will be on hand to capture the night’s opulence with free prom-style photographs.

Extending the anniversary party into Sunday, Nov. 20, The Lockview presents Wesley Bright and the Hi-Lites, a kinetic Northern soul band that covers the likes of Otis Redding and James Brown, but dishes out a few highly danceable originals, too.

The Lockview opens at 5 p.m. on Sunday, and the dinner options will include – what else? – soul food. The two-set show starts at 8:30 p.m., and it’s free for anyone who drops by, but it’s freeing for anyone who dances.

Revelers  may indulge any of The Lockview’s more than 160 microbrew beers, including some of our newest seasonal additions: Christmas ales from the Breckenridge, Thirsty Dog and Troegs breweries.

And when hunger replaces thirst, The Lockview has 13 gourmet grilled cheese sandwiches, along with burgers, chicken sandwiches, a vegetarian pita, salads and more.

The Lockview opened its doors four years ago, on Nov. 19, 2007, in a renovated space formerly occupied by Mr. Bilbo’s and then The Lime Spider. Since then, the restaurant has gone from quiet to riot, as patrons fawn over the grilled cheese sandwiches and beer selection, the occasional live band, a relaxed atmosphere and seasonal rooftop patio.

Well, I’m about a month into my Downtown Akron Partnership adventure and I must say that Downtown has yet to disappoint me. I have been actively involving myself in the pursuit to try every eatery Downtown, so far, so, so, so good! I’ve also been joining in on weekly tours of popular Downtown spots, and experiencing the art and culture in Downtown. First let me say, if you have not participated in the mid day walking tours, you have to check them out! With each tour my knowledge and appreciation for Downtown Akron grows. Akron is home to so much history; every street corner has a story, and with each story comes an example of how our community has influenced the world. Learning about our past can make you very excited about our future, no matter if you enjoy history or not. It’s amazing to see how Akron has been reinvented! Busy streets filled with new business and entertainment makes Downtown alive again!

Aside from all I have already done, I am planning to do much more. I am currently in the processes of putting together the first Battle of the Bands for First Night Akron on December 31. This event is specifically for teen bands, giving them a chance to play in front of the thousands in attendance. The Battle of the Bands will increase the teen culture at First Night, an event that provides engaging activities for the whole family. The search is on for bands, so if you know of any teens who would be interested in the competition, the applications are online at http://www.firstnightakron.org.

The summer is a special time for Downtown. The numerous food festivals throughout July are reason enough for anyone to get excited and come Downtown, even for a newly turned vegetarian like myself (it’s a daily struggle)! If you aren’t experiencing Downtown, you need to tune in and jump in! No matter what your interests, schedule or financial situation, you will find fun Downtown!